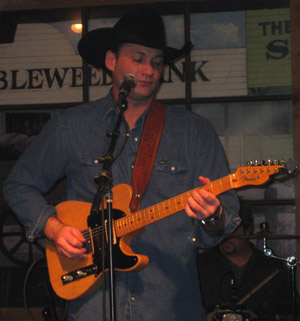 Wade Hayes was one of the most popular country music artists in the mid 1990's. He played Tumbleweeds Texas on Friday night in Houston, Texas to an enthusiastic crowd

There's one thing about living in Texas. Sometimes, you have a tendency to forget that Nashville exists. The vast majority of the artists performing at clubs and shows are Texas/Red Dirt artists.

Sure, you can see Carrie Underwood or Keith Urban at some concert pavillion or downtown arena, but that's not the country music I know and love.

Waylon Jennings grew up on music that they call Western Swing, or at least, he said so in 'Bob Wills Is Still The King.'

Well, I grew up on the likes of Wade Hayes, Rhett Akins, Daryle Singletary, Tracy Byrd and other artists who were big in the mid-90's. Things dropped off for them when country went pop, and they stuck to their roots. Or when newer artists came in and sold music with less talent.

Through that whole mid-90's stretch, I never had the opportunity to see Hayes live. And I knew he was an excellent musician in addition to topping the charts several times.

He performed for 90 minutes at Tumbleweeds Texas, a large country nightclub on the outskirts of Houston.

The Oklahoman politely asked the crowd if he could play some of his new stuff. They enjoyed it. And his old stuff as well.

But Hayes isn't done as a solo artist, and he proved that on Friday night.

Backed by his four-piece band, he started with a good mix of the old stuff, 'On A Good Night' and 'The Day She Left Tulsa', along with newer songs like 'What's A Broken Heart For You,' a ballad he co-wrote with Michael White, and 'She Knows Me,' about a good woman's dedication to her man in spite of his flaws. He co-wrote that one with McClurg.

An Oklahoman playing Deep in the Heart of Texas prompted some jokes from Hayes, who said his friends from Texas call Oklahoma, Texas Light. Hayes, 40, grew up in Bethel Acres, Okla. where he attended the same school from Kindergarten to 12th grade.

'God Made Me (to love you)' is another new Hayes ballad that he co-wrote with Trent Jeffcoat and Roger Springer that would fit in perfectly with the songs he cut back in the 1990's.

One thing I had forgotten about Hayes was his ability to perform good covers of classic country songs. He recorded several of them, like Glen Campbell's 'Wichita Lineman', Keith Whitley's 'Kentucky Bluebird' and Gary Stewart's 'She's Acting Single (I'm Drinking Doubles)', the latter of which appeared on an album called Tribute to Tradition.

Hayes and the band' musicianship really showed through on the Western Swing standard, 'Milkcow Blues.'

He called his fiddle player, Aaron Till, one of the best around, and then proved it by allowing him to perform a fiddle solo.

'Old Enough to Know Better' was the last song of the night, to nobody's surprise, and Hayes played it with just as much energy as if it were 1995. But the ballads from that album were pretty darn good, too. Songs like 'I'm Still Dancin' With You' and 'What I Meant To Say'

Like any artist, Hayes had to play his hits towards the end of the set. But the encore reflected his influences and tastes, even telling the crowd that they were being 'self-indulgent' by singing the ones that they love, Johnny Cash's classic 'Angel Flying Too Close To The Ground' and Stewart's 'Empty Glass.'

He had the perfect combination of tender ballads, fun uptempo songs and traditional country covers.

It was great that Hayes is still performing live. It would have been easy for him to step out of the spotlight, but I'm glad that he's back.

And if country radio is smart, they'll realize that Hayes and many of his mid-90's contemporaries are ready for another heyday.