Kellie Pickler cuts it up

Big kudos to Kellie Pickler for shearing her hair for a cause. Pickler shaved her head in Nashville on Tuesday to bring awareness to cancer. She did so because her best friend, Summer Holt Miller, has breast cancer.

"Cancer does not discriminate," Pickler said in an interview on Good Morning America. 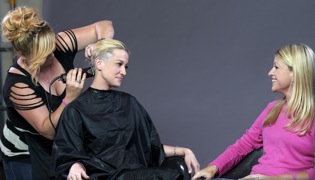 Of course, she is correct, and Pickler has taken a stand to battle breast cancer. Athena Water is giving at least $2 million as well to support the fight against breast cancer.

While everything Pickler has done from a humanistic standpoint is commendable, I wanted to comment on the personal. In her profession, image counts for a whole lot. Pickler cut an image with her blonde hair of course, just as Carrie Underwood does along with other country female singers.

In effect, Pickler was willing to sacrifice part of her image for something bigger than herself. At least, she had the wisdom to realize it's only an image, not something that necessarily defines her. Pickler probably realized that also - in standing up for the cause, she took on a much bigger issue. She has faced a lot in her life - from a dysfunctional family to issues with her record company.

In this day and age, where image counts for way way too much, Pickler is to be commended.