It's sometimes hard to figure out these lists of the top this or the best that that magazines and web sites are so fond of. The latest seems to be Forbes ranking of the top 10 country stars in terms of earning the big bucks. 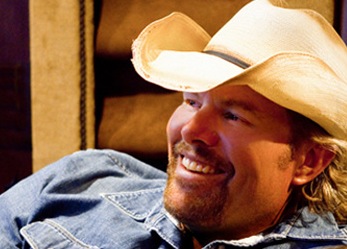 Toby Keith was number one with $50 million greenbacks taken in between May 2010 and May 2011. I guess owning restaurants, a drink, touring and CD sales will do that for you these days. I must say I was more than a bit surprised that Keith earned $5 million more than Taylor Swift. She did 20 tour dates by the end of May, but I guess selling a bunch of CDs, tour merchandise and endorsement deals left her in second. Better luck next year.

The ratings were not exactly scientific as the story by staff writer Dorothy Pomerantz pointed out. She apparently talked with agents, managers, publishers and lawyers among others to figure it out. And she pointed out that these were not estimates - not a surprise because I didn't expect TK to hand over his W-2.

What's the deal with Keith Urban? I thought his career was going well but he apparently didn't even earn $18 million in the year-long period.

Presumably all of these artists can survive on their earnings, but don't be surprised if Swift and Chesney move on up next year. On the other hand, should we really care about how much any of these artists make? Let's face it...these folks are all in a different stratosphere when it comes to money than you or I (unless you're reading this Mr. Keith), and that doesn't seem likely to change any time soon.