It doesn't get better thant his for Reba, Braddock, Shepard

This was a red letter day for Reba McEntire, Bobby Braddock and Jean Shepard because the Country Music Hall of Fame announced this morning that the three would soon be receiving probably the number one honor career-wise: entry into the coveted hall.

Shepard has enjoyed a long career, saying, "I have spent nearly 60 years doing something that I love, singing and promoting country music, and it's wonderful to see that my efforts haven't been in vain." 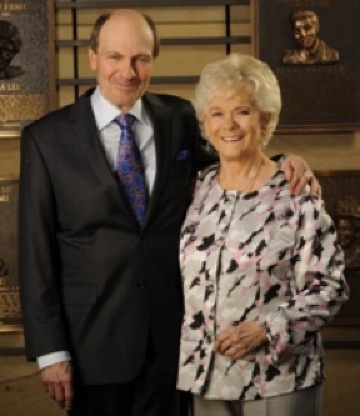 Braddock and Shepard at Country Hall of Fame

The Oklahoma native is joining the hall as a Veteran's Era Artist. She was born was born Ollie Imogene ("Jean") Shepard on Nov. 21, 1933 in Paul's Valley, Okla. The family, which included 10 children, later moved to Visalia, Calif., near Bakersfield, after World War II. As a young girl, Shepard listened to the Grand Ole Opry on the radio every week and saved her pennies to buy a Jimmie Rodgers record every year.

Known as a honky tonk singer, Shepard sang lead vocals and played bass guitar in the Melody Ranch Girls, an all-female band that she helped create as a teenager in 1948. One night, the group played the same venue as Hank Thompson. He helped her get a record deal at Capitol Records in 1952 and connected her with his producer, Ken Nelson.

That same year, Decca Records had achieved huge success with Kitty Wells and her song It Wasn't God Who Made Honky Tonk Angels, paving the way for female country singers.

Shepard's first single, Crying Steel Guitar Waltz, did not chart, but Capitol Records stuck with her. In 1953, the label teamed her with another young and rising talent, Ferlin Husky, for A Dear John Letter, a half-spoken/half-sung duet about a soldier in the Korean War. The song became the first post-World War II single by a female country artist to sell more than one million copies. Shepard and Husky soon hit with Forgive Me John, which became a Top 10 Country and Top 25 pop hit. She also enjoyed hits with Twice the Lovin' in Half t he Time, Don't Fall in Love With a Married Man, The Root of All Evil (Is a Man) and The Other Woman.

In 1955, Shepard reached number 4 on the Billboard Country Singles Chart with A Satisfied Mind. That same year she joined the Grand Ole Opry.

In 1956, she released her first album, "Songs of a Love Affair," which some consider the first country concept disc. She also broke ground by touring on her own instead of being either part of a couple or the female singer in a band.

Shepard experienced a drought as country went pop and against her brand of honky tonk.

Shepard married fellow Opry member Hawkshaw Hawkins (Harold Franklin Hawkins) in 1960, and juggled her career with being a housewife and mother to their first son, Don. Hawkins was killed in 1963 along with Patsy Cline and Cowboy Copas in a plane crash. Shepard was pregnant with their second son, Harold Franklin II, at the time.

Shepard left Capitol for United Artists Records. Her first single, Slippin' Away, hit number 4 on the country charts in 1973 and became her biggest solo hit since the 1950s. She continued to have success with songs including Poor Sweet Baby, At the Time, I'll Do Anything It Takes (To Stay with You) and Tips of My Fingers.

Shepard continued recording and today lives in Nashville. She continues performing on the Opry.

While clearly happy with the news of her pending induction, Shepard made a point of not forgetting some of her fellow country performers, who have yet to be enshrined, including the Wilburn Brothers and Skeeter Davis.

Braddock, a Florida native, is best known for his songwriting, and joins for the Songwriting category (although he released three albums). He played piano for Marty Robbins in the '60s, but song writing proved to be his forte. He had the good fortune of penning of country's greatest songs ever, He Stopped Loving Her Today with Curly Putman.

The Statler Brothers achieved 2 Top 10 hits with his songs You Can't Have Your Kate and Edith Too and Ruthless in 1967. A year later, Tammy Wynette took D-I-V-O-R-C-E, another Braddock/Putman tune, to the top.

Braddock's fortune continued through the decades with hits for T. G. Sheppard ( I Feel Like Loving You Again, Lacy J. Dalton (Hard Times) and he and Karen Brooks (Faking Love). In the 1990s, he had such hits as All My Old Flames Have New Names, a hit in 1992 for Mark Chesnutt and Texas Tornado and Time Marches On for Tracy Lawrence in the md-1990s.

He continues churning out the hits with such songs as People Are Crazy for Billy Currington and I Wanna Talk About Me for Toby Keith. Braddock also discovered Blake Shelton.

As made clear by Kix Brooks, who announced the honors, this was a "bittersweet" moment indeed for McEntire, who enters from the Modern category. She could not be there because her father was ailing in a Tulsa, Okla. Hospital, having slipped into a coma Fortunately, McEntire was able to break him the great news before he did so, which doubtlessly meant a lot to both of them.

McEntire, 55, has enjoyed a long-career with more than 55 million albums sold world-wide, 35 number one songs and 59 top 10 singles. She signed with Mercury in 1975, but it took her awhile as her first three albums did not even chart. In the music industry of recent years, McEntire's career may have been long gone dead by that point.

She achieved her first Top 10 hit when (You Lift Me) Up to Heaven reached number 8 in 1980, and she followed it with the Top 5 Today All Over Again.

McEntire later moved to MCA in 1983 where she achieved her greatest success, winning the CMA Female Vocalist of the Year Award from 1984-87. She also took CMA Entertainer of the Year in 1986. Considered part of the New Traditionalist movement with George Strait and Ricky Skaggs, McEntire veered far more towards pop, starting with her "Reba" disc in the late 1980s.

McEntire also enjoyed an acting career in movies, television and Broadway ("Annie Get Your Gun"), but never strayed from singing.

The hits never stopped coming either with such songs as You Lie, Rumor Has It, Fancy, Is There Life Out There, The Night the Lights Went Out In Georgia, Take It Back, The Heart Won't Lie (a duet with Vince Gill), Does He Love You (a duet with Linda Davis, which won the 1994 CMA Vocal Event of the Year Award as well a Grammy Award for Best Country Collaboration with Vocals), Why Haven't I Heard From You, The Heart is a Lonely Hunter, She Thinks His Name Was John, On My Own (with Davis, Martina McBride, and Trisha Yearwood), The Fear of Being Alone, I'd Rather Ride Around With You, How Was I to Know, Forever Love and If You See Him/If You See Her (with Brooks and Dunn).

In 2008, McEntire left MCA for Valory where she has released two albums and still hits number one, including Turn on the Radio last year.

McEntire, of course, has been a major presence in country for more than two decades through her diverse career. And in this day and age, she must be doing something right because it is awfully hard to keep the hits coming.

A heartfelt congrats to McEntire, Braddock and Shepard as they reach the pinnacle of success. It just doesn't get any better than this.