Paisley revs it up

Brad Paisley had a fun Sunday in Daytona, Fla. Not only did he get to play a few songs for the faithful, but he also got to ride in the pace car and see an exciting race. 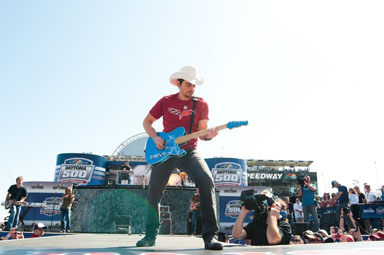 Paisley revved up the crowd at the Daytona 500 Pre-Race Show leading up to the start of the biggest race on the NASCAR circuit at Daytona International Speedway yesterday. He performed Water, Mud on the Tires and his current single, This Is Country Music, before heading to the pit where he got behind the wheel of the red Chevrolet Camaro SS official pace car as the honorary driver.

Ever the tweeter Paisley sent out several after finishing his pace laps.

"Seriously, driving the pace car was about the most ridiculously exciting thing I've ever done. & @JeffGordonWeb was bumping me tradin' paint!" Sorry to hear that also...I thought he would have said something about playing guitar or some gig.

"Looking in your rear view mirror and seeing that sight is something I may never top." And who wants to feel like you're being chased by dozens of cars?

"Thanks to Mike Helton, NASCAR, and @TeamHendrick for my fantasy camp today." Paisley apparently is not so hard to please. They guys have it easy.

The inclusion of country music in NASCAR events, of course, is nothing new. Sunday only proved the point.