Just another day at the awards shows

Handing out awards isn't the biggest deal going. Sure, it's always way better to win than lose. After all, it gets you more than the allotted 15 minutes of fame, not to mention a few extra ka-chings at the cash register. 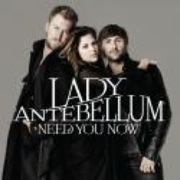 With that said, when it comes to the Academy of Country Music awards nominations announced Tuesday, it was as if Lady Antebellum took over for where Taylor Swift left off. Chances are if you had to place your money on who would get the most nominations it would not have been the three folks of Lady A. Instead, Swift would have easily been assumed capture the most nominations.

In the case of Lady Antebellum, one song - the title track - went a very very long way. Need You Now was nominated for the Top Single Record, Song and Video. Swift was nominated in the video and song categories, but not single record. But somehow Lady A wasn't worthy of Entertainer of the Year.

Who were some of the losers here? Considering that he had one of his best albums out - "Southern Voice" - Tim McGraw received a grand total of nada. As in zero nominations. He just doesn't seem to be on the radar screen of those who vote for the awards. That's okay because McGraw doesn't need to worry on face time or awards to maintain a healthy career. While not exactly dyed-in-the-wool country, one gets a sense of authenticity about McGraw and his music.

Another loser - considering how big they are - Sugarland. One measly nomination for Top Vocal Duo, which they may not even win thanks to Brooks & Dunn being in the category. I can't say I've ever been a fan of Sugarland - it all sounds somehow too calculated to me and definitely not country enough for my ears - but they sure captured themselves a ton of fans.

Toby Keith never does very well at these awards shows - he's about given up on them. But somehow it does seem ironic at the very least that he gets nominated for Entertainer of the Year, but he can't cop one for Top Male Vocalist.

Martina McBride has a big voice, but that did not translate into any nominations for her. Others on the short end included Dierks Bentley, Jason Aldean, despite three big hits in 2009, Jake Owen, Kellie Pickler and Justin Moore. The problem for Aldean is who should he have replaced? With Chesney, Paisley, Darius Rucker, George Strait and Keith Urban all nominated, it's hard to figure

A few head scratchers - top new solo vocalist nominees were Luke Bryan, Jamey Johnson and Chris Young. What's new about any of them? All are on their second album with Johnson on his second label. This category defies credulity and gives awards shows a bad name. And this in no way should be interpreted as characterizing the artist - it's the process that's the problem.

Just a typical day for awards.