Down at the end of the sixth paragraph in discussing the Album of the Year category, I wrote "Stapleton is one person who doesn't need to worry about making a speech, but if I eat my words, I won't complain. I just think he's the darkest of dark horses." 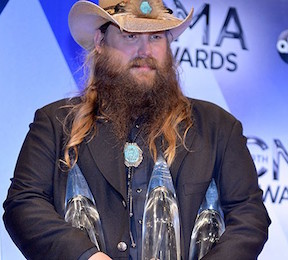 I am eating my words and not complaining one bit. It was most definitely hard to believe that Stapleton was the big winner with three CMA awards - Best Album for "Traveller," Beast New Artist and Best Male Vocalist.

I thought Kacey Musgraves would take the Album of the Year honor for "Pageant Material." For starters, she has received recognition at other awards ceremonies despite not having any hit singles, though both of her major label releases were excellent. She is a top shelf artist.

Stapleton, a music veteran at 37, can't even claim to have any hit singles or radio play (well, he did receive some today on Boston's WKLB which I listened to, but I would venture to say that was only because he won last night).

I also dismissed his chances in the Male Vocalist honor where I thought Eric Church would win, while Dierks Bentley, Luke Bryan and Blake Shelton all had chances. As for Stapleton, I wrote the others "could take it, but not Stapleton."

Finally, there was the New Artist award. I did not see Stapleton having a chance in a category with Thomas Rhett and Sam Hunt. Both have enjoyed huge years with Hunt selling 800,000 units. Both have had a lot of hit singles.

I am left wondering exactly how Stapleton did manage to win three awards. Could it be that Rhett and Hunt canceled each other out in the New Artist category, leaving the door open for Stapleton. Even then, I thought Maddie & Tae were in a far stronger position.

Maybe that's why he took home the other honors as well. It's just hard to fathom - not that I'm complaining - that he took these big honors.

The Kentucky native is most deserving. He has enjoyed a lot of success as a songwriter. Prior to being on his own, he was in the very fine driving bluegrass band The SteelDrivers where his soulful vocals set the band apart.

While music awards ipso factor are overrated, I will say that this was a most welcome night for Stapleton. He was not getting the airplay on commercial country radio despite the excellent "Traveller" CD. Having such bright lights cast on him is his chance to shine, a very rare opportunity. Here's hoping that he runs with it.