Being an outsider works wonders for Church

If one had to predict what the number one selling country disc of 2014 would have been, I suspect people would have been hard pressed to select Eric Church's "The Outsiders."

Now, that has nothing do whatsoever with quality. Church has got plenty of that on his left-of-center disc. The sound is more rock than country, but Church also could not be accused of following trends. Nope. He did it his own way, and it definitely showed up in concert. 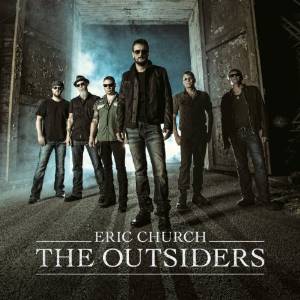 In fact, Church has progressed markedly as a performer. Catching him in Manchester, N.H. this past fall, Church was superior in comparison to the two other times I've ever seen him. Confident. In command and with a band that kicked it. (it also helped he had as openers the excellent songwriter Brandy Clark and veteran honky tonker Dwight Yoakam). This not a paint-by-the-numbers album or concert.

Somehow "The Outsiders" managed to sell 800,000 units. And that was from a disc that was not awash in hits. He has managed to enjoy two top five hits with "Give Me Back My Hometown" and "Talladega," but the swampy "Cold One" only managed to hit number 20 on Billboard. Church himself noted that this was not going to have songs filling the radio station playlists.

With competition coming from the likes of bro country acts Florida Georgia Line and Luke Bryan and Jason Aldean, who's more southern rock than country, it remained surprising just how well Church did. These folks are far more commercially oriented.

Church achieved his mark even though Garth Brooks was back with his first studio album in years - "Man Against Machine," which probably did not perform as well as expected (Brooks' tour is another thing, however). Not to mention, the excellent release from Miranda Lambert, "Platinum."

Of course, it helped that Taylor Swift was not considered country (nor should she have been with "1989"). That just may have had something to do with Church being numero uno.

Congrats to Church for offering doing it differently on his fifth release. He's never been a dyed-in-the-wool country performer, but at least he isn't not one to put his finger up in the air. There's something to be said for being an outsider.