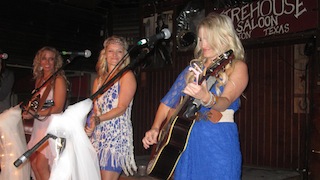 Susan Hickman, left, and The Rankin Twins, were two of the acts to perform at the Firehouse Saloon's "Women of Texas Country" concert last month in Houston.

There's no question that the vibrant Texas Country Music scene is dominated by male singers. There have been some notable exceptions, but most of them have been accepted as part of the Nashville and Texas scenes. See Miranda Lambert and Sunny Sweeney - a pair of native Texans who have done quite well with a national audience.

Charla Corn and Kacey Musgraves are a couple of female artists with potential to be stars on the Texas Music scene.

As for the grassroots Red Dirt scene, Susan Hickman, The Rankin Twins and Sheila Marshall are three of the acts who are increasing the presence of females on the scene. They were the headliners of the show.

They played a show on Thursday, Sept. 20 at the Firehouse Saloon and made quite an impact on the fans in attendance.

They performed songs together and apart, but showed their talent throughout.

One of Hickman's best songs is "Hell Still Ain't Frozen Over" and "Do Me A Miracle."

The Rankin Twins released their most recent single, "Rain," in March and they have made quite a name for themselves in the dancehalls and honky-tonks throughout Texas.