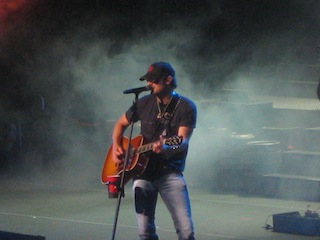 He sang, he picked and he played the piano on "Springsteen".

Five years ago, I saw Eric Church play a small club near Sacramento, Calif. It was worth driving about an hour each way to see him perform in a club usually reserved for hard rock and heavy metal.

It's kind of cool to see that three albums in, the North Carolina native is headlining an arena tour. Still, I wondered how he'd do in the Toyota Center, in Houston, Texas.

I was impressed. He played several hits, including many from the "Guys Like Me" album, his 2006 debut album that I absolutely loved. It was so cool to hear "These Boots" toward the end of the show.

Church, who had Justin Moore and Kip Moore (not related to each other), open the show, played an acoustic set that included "Love Your Love The Most," and "Sinners Like Me."

Although some of the seating was blocked for a better concert experience, Church's high-energy show was effective in a large venue, such as the home of the NBA's Houston Rockets.

"How 'Bout You," "Guys Like Me," and "Springsteen" - which Church played piano on stage for - were some of the highlights of the show. He also did a cover of "A Country Boy Can Survive." 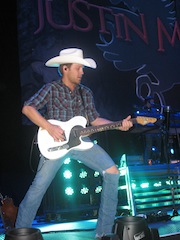 Justin Moore heard you drove a Prius. Yeah, he's going to make fun of people who care about the environment.

Justin Moore is a good singer, and he's totally cornered his demographic market.

It was a really cool scene when he asked fans to wave their cell phones (cell phones are the new lighters when it comes to concerts) during the song, "If Heaven Wasn't So Far Away."

But part of Moore's appeal is promoting ignorant views, like not knowing what Sushi is, criticizing people for being "Green" or caring about the environment.

Look, I understand it's all part of his persona. But most people are from towns that have more than 1,000 people who live in them. Our world view extends beyond the County Line.

I like his music, but I'll agree to disagree with his narrow-mindedness.

Kip Moore, on the other hand, played a short set, but he has all the makings of the next big country star. He has great stage presence, good fan interaction and knows how to pick songs.